At last weekend's ManSask Provincial Championship a Steinbach swimmer astonished even his own mother reaching a personal best in 4 events.

Pamela Reimer-Hiebert, current Steinbach Skimmers Club head coach says her son Gavin got interested in swimming at a young age. She says it was during his grade 2 school-swim safety classes at the Steinbach Aquatic Centre that the instructor said, “he actually moves the water really well and he understands and he's pretty quick. You should look into speed swimming. So, we looked into it and got involved. He was a pretty fast young swimmer and medaled in every event he swam in.“

Reimer-Hiebert continues by saying that just before Covid hit he joined the U of M Bisons swim team and was excited to swim with different swimmers, but the pandemic put a pause on that. She says, more recently he has been able to connect with the U of M coach who gave him some things to work on. “Gavin was really happy when we could get back to a regular schedule last fall.”

Then this past weekend at the ManSask Provincial Championship swim meet in Saskatoon, he made a Canadian Junior time, which Gavin’s mom says, “was a new level of accomplishment for him, which also means he'll be able to swim at a higher level meets once he has a few more of those times under his belt.”

His personal best times at the ManSask competitions were:

Reimer-Hiebert explains the distance Gavin needed to swim. “So 50 meters is twice the length of our Steinbach pool which is 25m in a single length. He swam that really well. The breaststroke is not his favourite swim. He hadn't done that one in quite a while, so it was a surprise to everybody that he pulled that one out. But yeah, he loves doing the butterfly which is the swim Michael Phelps is famous for. He really likes freestyle as well, which is just the front crawl.”

The proud mom notes her son made another accomplishment last weekend, “at the end of this month the officials will take the best 50m times from all the Manitoba and Saskatchewan swimmers, then the provinces have a friendly competition. It's called an individual medley, where they swim as a team. So, one person will swim backstroke for 50 meters, the next one will swim breaststroke for 50 and then butterfly for 50 and freestyle for 50 and if you have the best, or the fastest time in that particular stroke you'll be chosen to swim on that provincial relay team. Then they do a head-to-head Manitoba versus Saskatchewan and Gavin has been part of that relay team for the last number of years.”

She says “this time Gavin had the best time for butterflies. So he swam that leg of the race it was a pretty big deal like, all the kids gather around the pools with Manitoba on one side and Saskatchewan on the other side and it’s pretty intense, cheering, and yeah, it's just, it's a lot of fun.”

Reimer-Hiebert says, sure the parents are excited, but it’s really the swimmers that make a big production of it, including walking into the pool area. “They choose Thunderstruck to walk into. It's just huge and loud.” She explains that as much as getting one's individual best time, it's more about being on a team. “It's just a really positive atmosphere and your team cheers for you. Even though you're competing against each other, my experience is that the camaraderie is there even before the competition. They're always cheering for each other, which is great. But you know, if Gavin is trying to make a time, let's say for this Canadian Junior time, and they know what it is and they see him achieve that time when he touches the wall, there's kids cheering you on, so in that swimming is maybe different than some other sports.”

As the parent of a child who is being rewarded for his hard work and effort, Reimer-Hiebert calls it an honour. “It means you have one of the fastest times in the province and you're selected based on that too. He just felt honoured.” She continues, “I coached Gavin for a number of years before he went to the Bisons. But you know, when you go to competitions, it's just such a great community. The kids are lovely and they just encourage each other. And he just feels even that support, so that's great.”

Continuing with his swimming career, she says that Gavin will now be coached by someone who has had swimmers at the most recent Olympics and swimmers that are in the International Swimming League. “He (Gavin) would love to be part of that. He's got a lot of work to do, but he's encouraged because they see potential in him and they are seeing the improvement in the achievements he made last weekend. He has the reassurance that ‘ok, I'm still on the right path, I haven't topped out or I haven't maxed out on what I can do yet, in this sport. I think he's encouraged.”

Reimer-Hiebert is a proud parent. “Like you want them to achieve in this life, no matter what they're doing, you want them to be well-liked and to just do what they can do and you know you just hope and you pray that you've done your job as a parent to get them to that place where they can spread their wings and move on and make their choices and I just kind of feel like he's kind of at that place, making his choice. It's not me deciding for him, but he's moving on and I just I wish him well, and I hope he sees the success that he wants to see.”

Gavin Reimer graduated from the Steinbach Regional Secondary School in 2022 and plans on going to U of M for Sciences, as well as swimming on the Bisons Swim Team. 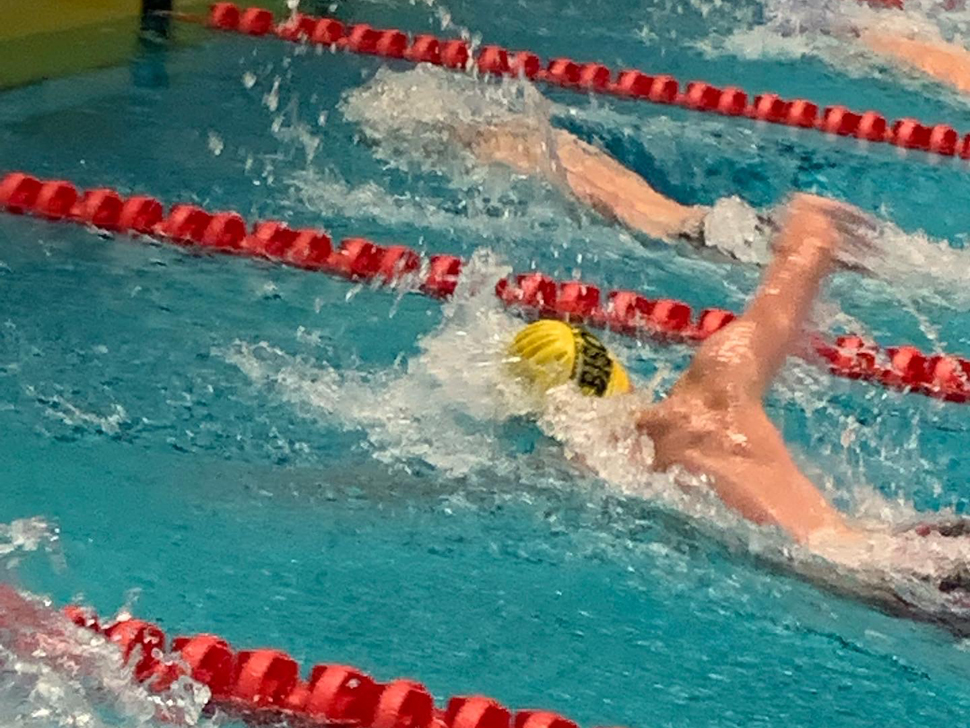 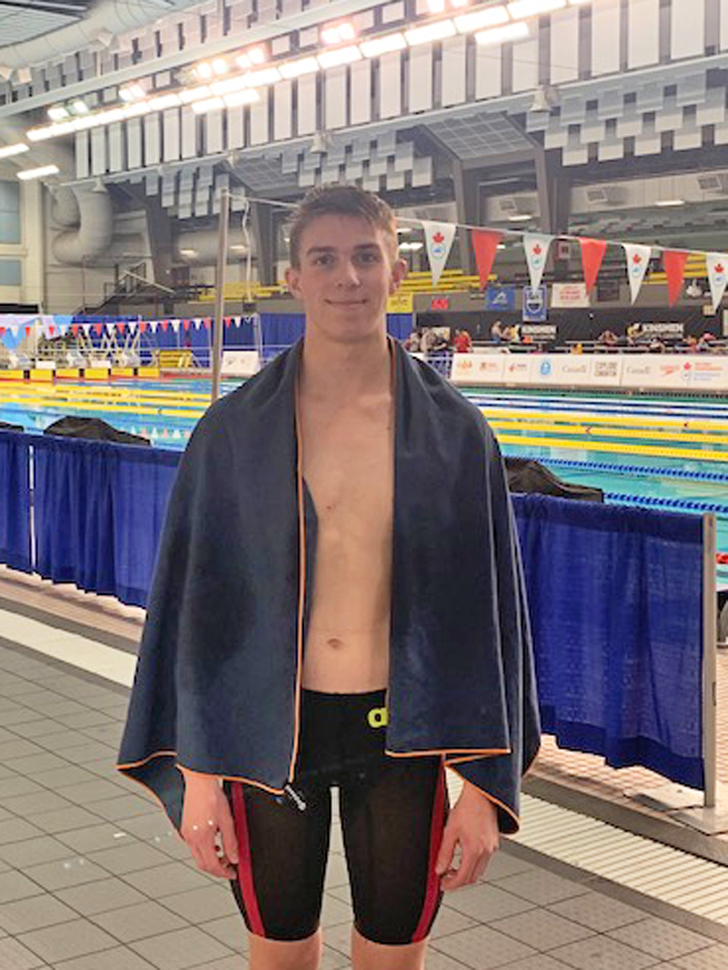 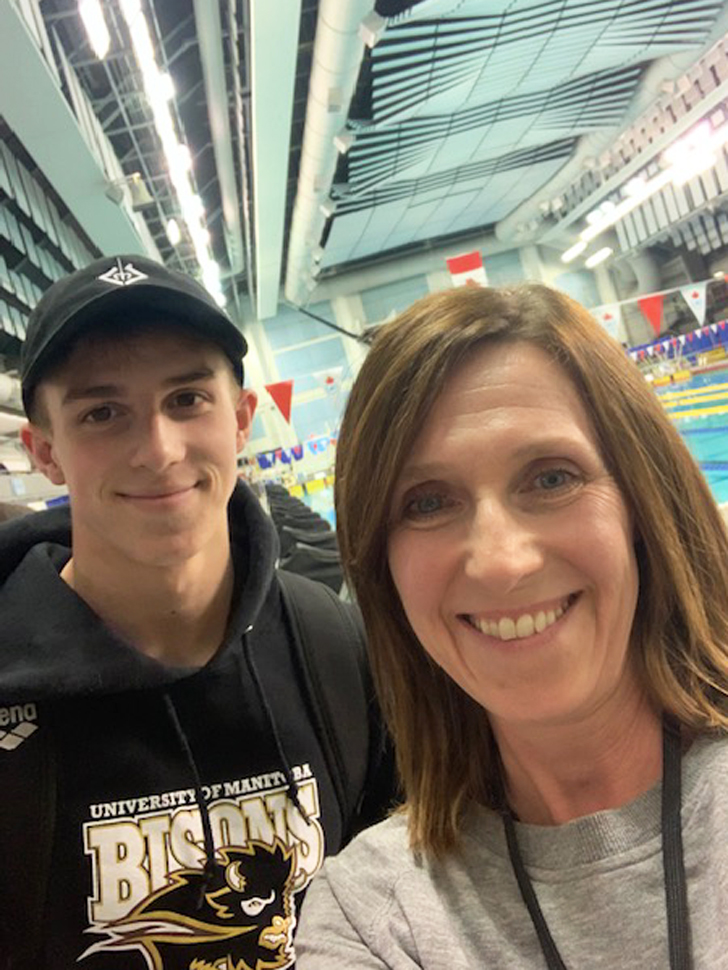