It’s back on Tuesday, October 4 from 6-8pm. Free admission! Click for details...

Nighthawks soar over Flyers for first ever win

The Niverville Nighthawks traveled to Winkler to battle the Flyers and when the dust settled, the newest MJHL franchise emerged with their first-ever win.

A physical tone was set early in the first period as both teams showed a willingness to throw their weight around. Early checks were followed up by scrums after the whistle as both teams looked for that edge.

Forward Josh Paulus scored just over six minutes into the period to put Niverville up 1-0 as the 20-year-old showed off his good hands in-tight, burying his first of the year with Evan Bortis picking up the only assist.

Bortis would collect his second point of the night as the Nighthawks extended their lead on a power play. Gavin Gunderson scored after the man-advantage unit worked the puck around the Flyers zone, eventually breaking the defense to put themselves up 2-0. Captain Brett Tataryn, along with Bortis, were credited with the assists.

Not done yet, Ty Kennet capped off the offensive surge with his first, putting Niverville up 3-0. Aidan Ballance picked up the lone helper and the Nighthawks headed into intermission with the lead.

More power play scoring for the road team followed them out of the locker room and into the second period as it was Tataryn getting his first as a Nighthawk to make it 4-0. Bortis nabbed his third point of the night while Paulus capped off a tidy two-point effort.

Winkler was finally able to beat Chris Fines and cut the lead to 4-1.

After two periods, the Nighthawks had the lead and a solid edge in the shot department as well.

Less than five minutes into the third, Dayden Collier cashed in to restore the four-goal lead for Niverville, 5-1. Ethan Kelly was credited with the lone assist.

Tempers flared as both teams cut paths to their respective penalty boxes.

Things eventually boiled over as Niverville's Owen Hendrickson and Winkler's Logan Fillion dropped the gloves for a spirited tilt.

The Nighthawks put the game into cruise control and with some more strong play by the goaltender Fines, stymied the Flyers en route to their first-ever franchise win.

Fines picked up the win making 27 saves. The Nighthawks finished 2-8 on the power play and 4-4 on the penalty kill.

It was an emotional win for many reasons, one of which was Niverville's Head Coach Kelvin Cech making his return to Winkler after starting his MJHL coaching career there.

The Nighthawks will look to keep riding that positive momentum as the Flyers head to Niverville for a return matchup Friday evening at 7:30 pm. 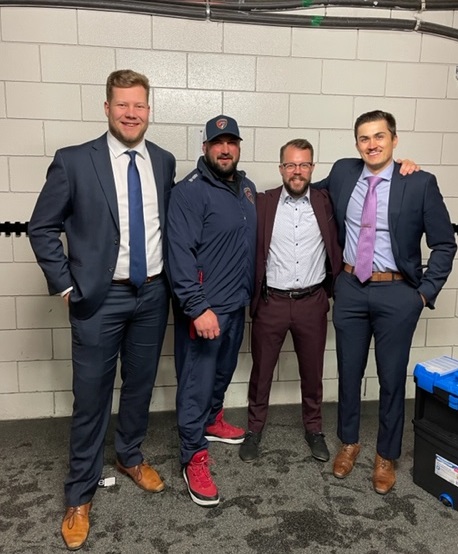 Xplore: Connecting with Self and Others After Adversity