"We lost everything, but we're okay"

"We lost everything, but we're okay."

That is the message that Jim and Marlene Reimer of Steinbach sent to family in the early morning hours of this week Wednesday. Those messages were sent by voice and text as the couple stood helplessly under the night sky, watching flames scorch their business, home and possessions.

Jim recalls it was about 12:30 Wednesday morning when his wife awoke to the sound of their barking Sheltie.

Marlene looked out their bedroom window and screamed to her husband that their truck on the driveway was on fire. Jim says it took a bit for him to wake up and realize what was going on, but after seeing firsthand the huge flames overtaking their truck, van and now too their garage, he raced downstairs to call 911. After what felt like an eternity, Jim says he finally got through and told the operator, "fire, 228 Hanover, a truck and car fully engulfed."

The couple quickly got dressed, grabbed their dog and vacated the back of the house. Jim says it never dawned on him that their house might catch fire too. By taking the back door, Jim and Marlene ended up needing to run past the splash park, down Elmdale Street and Elm Avenue before getting back to Hanover Street and the front of their house. By then, the first of the firefighters and police had shown up on scene.

"I could see that the fire had actually begun to engulf the house," he recalls. "These things spread a lot faster than you can imagine."

Neighbours then brought out lawn chairs for the Reimers and offered a pair of sandals to Marlene, who had escaped their home barefoot.

"It was unbelievable, just absolutely unbelievable," says Jim. "These things happen somewhere else but they never happen here."

The Steinbach Fire Chief says it took about an hour to put the fire out, but by then, the damage was done. Jim says it appears most likely the fire started in an extension cord plugged in from their camper to the garage. He notes there were some garbage bins flipped upside down, which must have been sitting on top of the cord. Jim says in all likelihood that pinched the cord and over time created enough heat to start the fire.

"It was not arson, it was not vandalism, it was just accidental," he says.

But, Jim says that accident took away his livelihood. Lost in the fire are their camper and two company vehicles as well as their entire shop and all of its contents. In reflecting back on the "we lost everything, but we're okay," message he sent to family early Wednesday morning, Jim says it was those possessions he was referring to.

However, in the hours that followed, Jim came to realize that though the fire did extensive damage to their home, many possessions were salvaged. For example, Jim's office, located only eight feet from their garage has water damage but his records are still intact. As well, they have furniture, which Jim says after some cleaning and deodorizing can probably be used again. And then, one of their prized possessions, their collection of photo albums containing decades of memories did not even suffer water damage.

"There is a lot of stuff that was saved," he says.

As for the house, he says that is a different story altogether. Their bedroom, where Jim says they were dead to the world until their dog started barking, has probably the most damage of any room in their home. He notes there is heavy smoke, water and heat damage.

"You would have died in the smoke," he says. "The heat and the smoke would have killed you upstairs, in all three of our bedrooms up there."

According to Jim, a structural engineer will determine whether or not the house is salvageable. Though he admits he is not sure how much faith he has in the structure anymore, and questions whether or not he could even sleep in that house again, not knowing whether the fire might have compromised the electrical work.

If this is the end for the house at 228 Hanover Street, it leaves behind more than a century of memories. The house, built in 1912 is a heritage home. Jim says from what he knows, one of the earliest registered owners of this building was the Steinbach School Division, which today is called Hanover School Division. It was a teacherage, lived in by the Julius Toews family. Toews was one of the earliest principals and teachers in the Steinbach school area. At the time it was a single-level house with a large attic.

Jim bought the house 41 years ago, but only moved in two and a half years later at Christmas in 1983. He says over the years they have done a lot of work to that home. While doing these renovations they have come to get a clearer picture of what the original house once looked like. Jim says it was during these work projects that they discovered some interior walls which were clearly once the exterior of the building, or come across sections of the home that once had windows or a basement access.

He says whenever they have done a renovation project, they have slipped a time capsule into the walls, often in the form of a newspaper. Jim says some time capsules in their home were left there unintentionally. For example, he recalls the time they discovered newspaper clippings from the Hindenburg fire underneath some vinyl flooring. And, because of how the house was built where studs run from the main floor all the way up into the attic, Jim says over the years items have fallen down those open cavity wall studs. While opening some walls back in 2010, they discovered shoes and immigration application forms that had fallen from the attic.

Jim says they have found a place to stay for the next few weeks to help bridge the gap. And, one of the first orders of business will be to start building his collection of tools again.

"I have not a single tool," he says, after taking a few sips from his French Vanilla coffee Thursday morning. "I have it on my list today to go out and buy a tool bag and a bunch of tools and Makita. I got to get something started. Next thing I got to do is get a truck."

But, Jim says they will make it through this, all thanks to their dog who saved their lives.

"Absolutely, the poor dog was in distress," he says. "And the fact that my wife doesn't sleep very deeply, the way I do. Take any two of those out of the equation and sorry I wouldn't be here today."

"41 years ago we bought this, our dream house. Due to a move to Alberta, we only moved in Christmas of 1983. We raised our four kids here, two of whom were born while we were here. We welcomed their spouses and all 13 grandchildren over the years to feel welcomed within these walls. We taught them to honour and serve our great God. It is that great God who saw fit to wake us in the early hours, July 6, 2022, at 12:22 am, to escape with our lives and our dear Sheltie. We have been surrounded by loving family, friends and neighbours. Praise be to God." 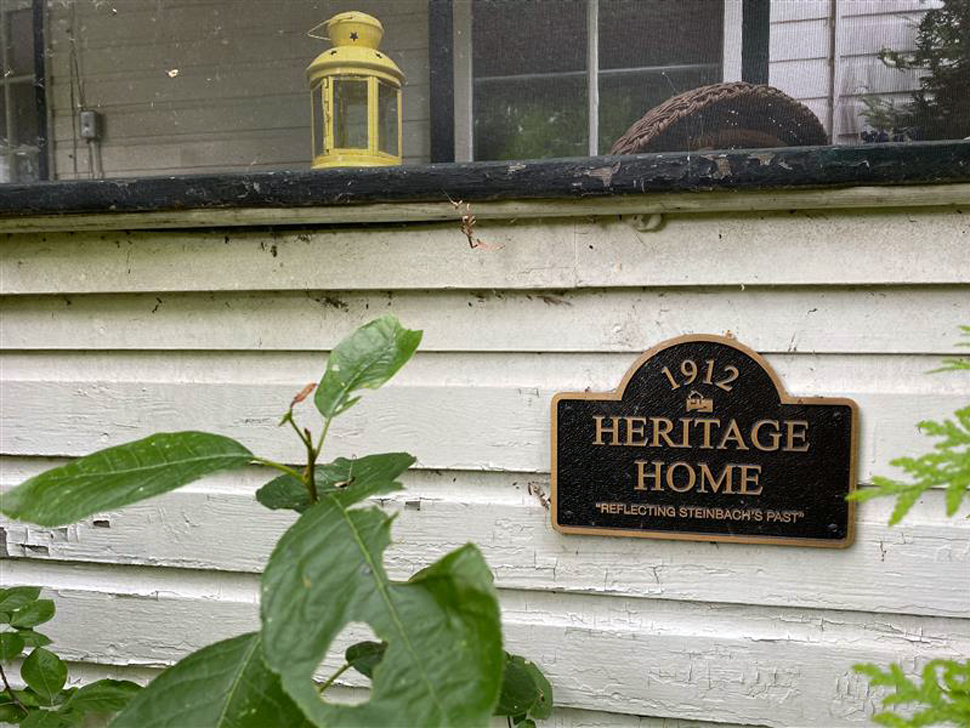 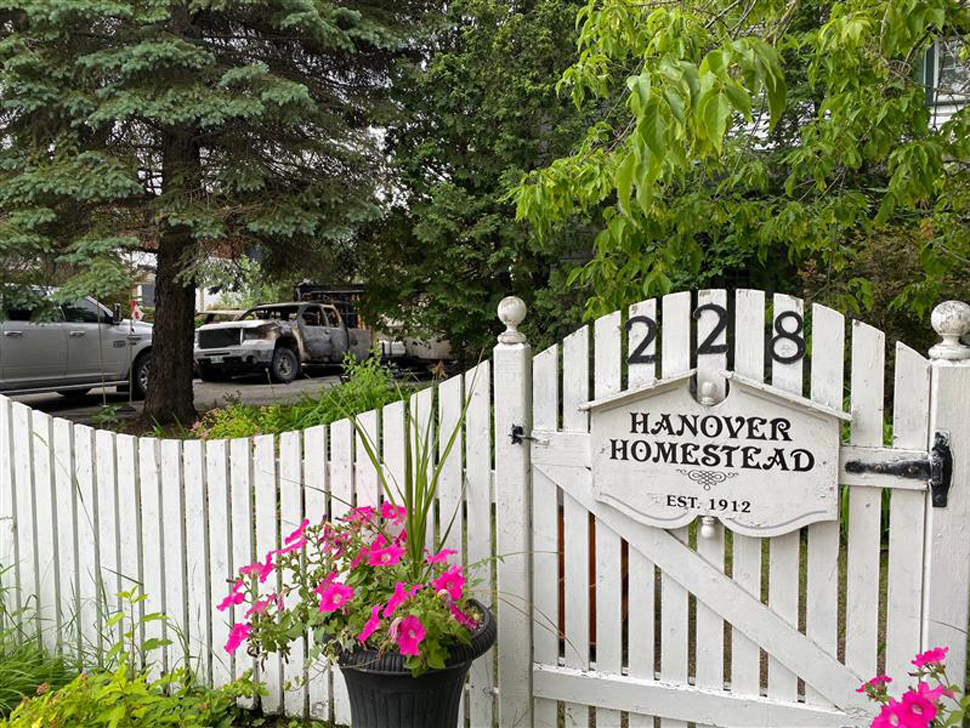 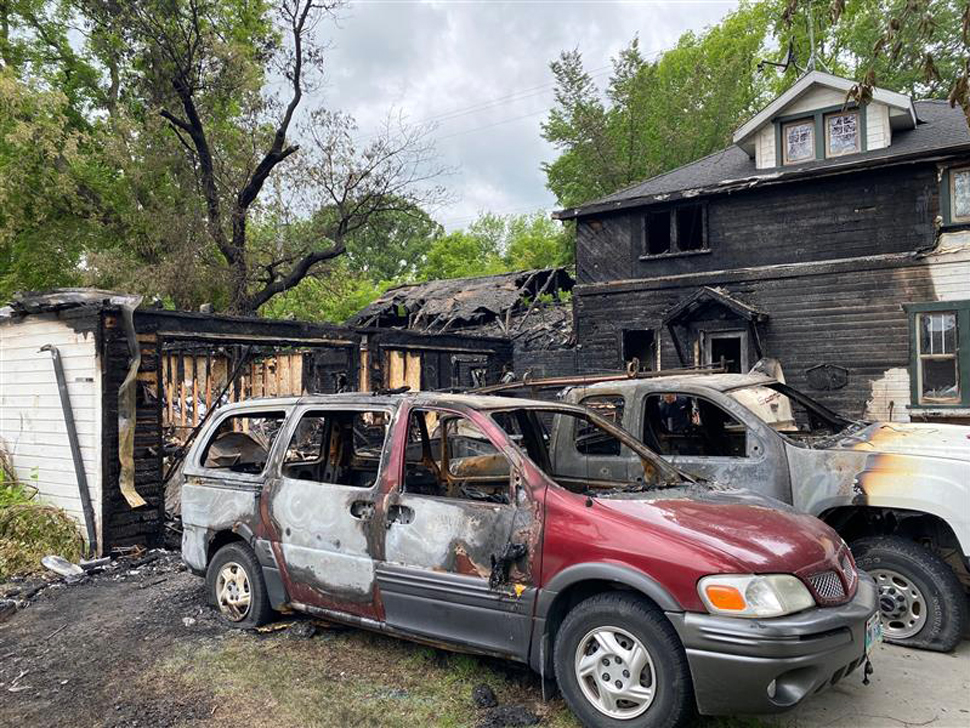 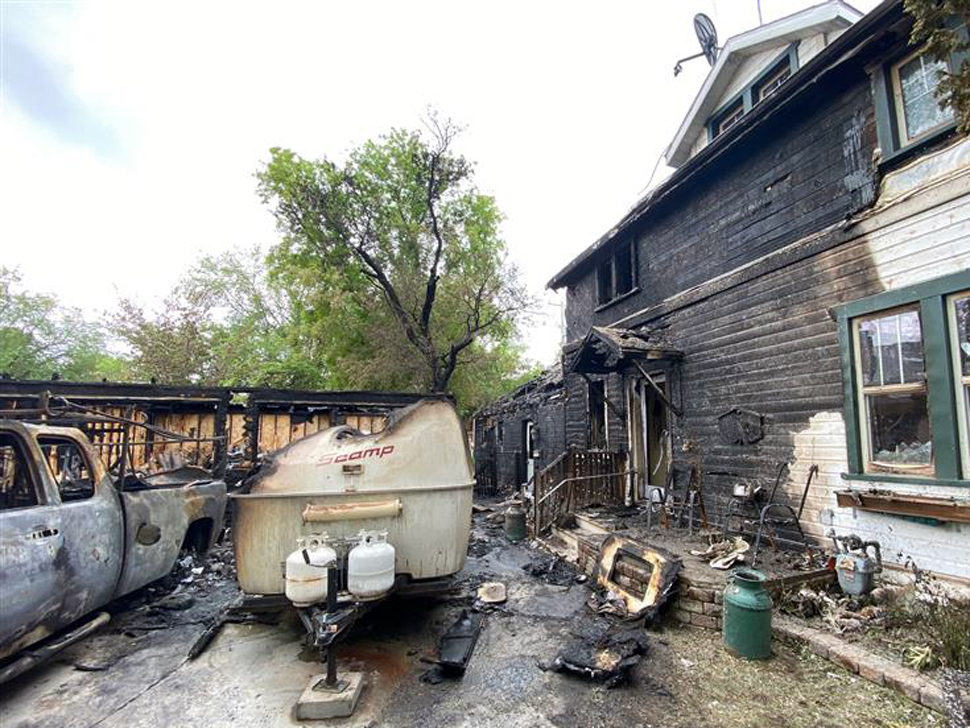 Break, enter, and theft reported at a Steinbach restaurant

15th DEKALB SuperSpiel on this weekend at the Morris CC