The Sidetrack Bandits will be performing at Steinbach Comedy Night on Monday.

Jeremy Plett from the Sidetrack Bandits says the show will be a combination of sketch comedy, stand-up comedy, and improv.

He says it’s not ‘technically’ a Christmas show since it’s on November 28th, but they do have some sketches about Christmas they are excited to share.

“We have a sketch involving Santa Claus and some mishaps that he endures at the hands of some children who happened to end up on the naughty list.”

He notes the funniest moments on stage actually happen when something doesn't quite go right and you just roll with it.

“The audience loves to see when something changes and you kind of acknowledge it as a performer. You're like ‘okay, this isn't how it's supposed to go, but let's just keep going anyway.’”

Plett says Brandt has done quite well for himself in competitions in Winnipeg, so it's really exciting to have him hosting for them.

They are also excited to have the Backyard Theater Company’s Young Company join them. Young Company is a group for young performers ages 16-18, which Plett is instructing.

"We've got a splattering of people in different groups and it should be really exciting.”

He says Steinbach Comedy Night is not just about providing entertainment for the area in and surrounding Steinbach, but also creating opportunities for local entertainers.

"We wanted to start a night where ‘oh, this person is interested in doing standup, let's get them into this’ because a lot of people are nervous to enter into comedy,” he says. “Because first off, there's not a place to do it, and secondly, they don't have a connection.”

They are looking forward to providing that space for people in the Southeast to grow their confidence as entertainers.

“There are a lot of really amazing and talented comedians and entertainers from the Southeast that don't often get a chance to perform here in the Southeast.”

The Sidetrack Bandits is made up of a few local couples who enjoy entertaining. They are Cameron Penner, Heather Penner, Jeremy Plett, Michelle Plett, Thalin Dyck, and Kenton Dyck.

Plett says it will be a night full of fun and goofy shenanigans.

The show is this Monday, November 28th at 7:30pm at the Steinbach Arts Council. Doors open at 7:00pm. Rush seating. 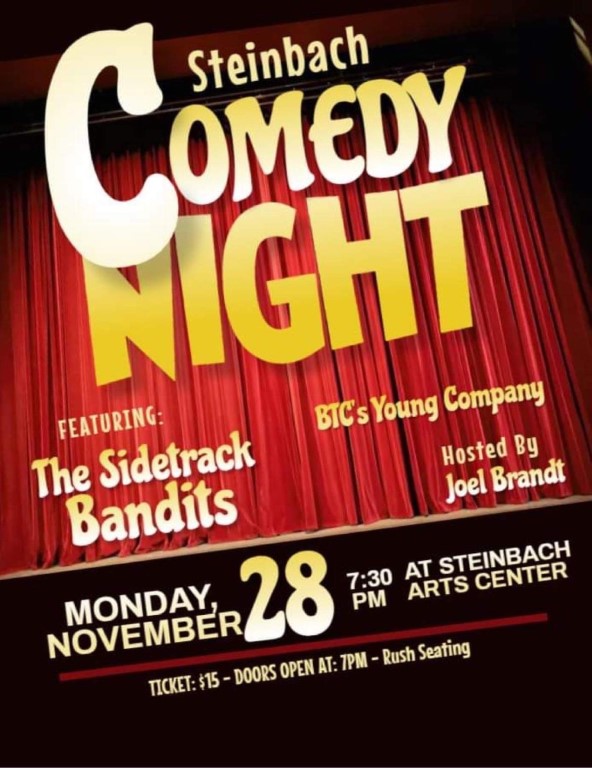 “It saved my life.”: Steinbach woman on heavyweight arm-wrestling and overcoming hardships