How two outdoor adventure clubs, from different seasons, are helping each other

It's that time of year again. Time to start closing down the ATV trails that wander through the forests of southeast Manitoba and get them ready for winter.

While many outdoor adventurers enjoyed the ATV trails in the forests of southeast Manitoba this summer, they were difficult to maintain. According to Woodridge Sandhogs ATV President Gary Hora, “This year was definitely a challenge for all the clubs, mostly due to the heavy rains we got and then the soil erosion on our trails. It seemed to be a never-ending battle fixing problem spots and repairing the erosion, just to make the trail safe for riders to enjoy.”

Hora says the Eastman ATV trails near Hadashville, to the north of Woodridge really struggled. “They are lying slightly lower and they have more swamps and waterways to contend with. But for both our clubs, we are grateful that we didn’t have any fires this year. So that was kind of the other side of the coin, even though it was wet and we had to deal with erosion, at least we didn't have to deal with fires this year like the previous year.”

Hora notes that the initial damage to the Woodridge ATV trails happened with the spring rains, “But it was more the heavy rains in summer that really damaged sections of trail, especially in very sandy conditions or anywhere you had a small hill or incline-decline, that's where the water would run and start washing away that sand, so it seemed to be more the summer rains if anything.”

Hora answers this question, clarifying for residents of the southeast who plan on using the Woodridge ATV trails, that it is designated as a multi-use trail. “So, multi-use means all users can utilize it because it is on crown lands. So our trails are closed to ATV traffic for winter, and we won't groom the trails, like pack them down, so with the snow, they can become impassable for ATVs or side-by-sides. In saying that, you can ride the designated trails or Sandhogs ATV trails with a snowmobile and you won't require a Snow pass. However, we do have a few sections of our trail that are a shared trail with other snowmobile clubs and when you’re on a snowmobile club trail you do require a trail pass.”

Hora suggests you take some time to investigate the trails you anticipate using before heading out. “We always encourage everyone to buy a SnowPass. Our local snowmobile clubs put a lot of time and effort into their trail system, so it's simple, just buy a trail pass, and then you're covered everywhere.”

The Woodridge Sandhogs ATV trails are typically closed down in the middle of November and Hora shares a few reasons why they do that.

“One is we want to respect our winter snowmobile club users. They put a lot of time and effort into their trail system and we don't want to see ATV traffic on there, potentially damaging groomed trails or ready-to-be-groomed trails. It's frustrating for them. As well, when it’s time for their season we want to let them have their season. All user groups have to get along, that's all. And that's what we really promote.” Hora says by November 10th they will slow down organized club rides and official meetings, but there’s still always behind-the-scenes work to be done.

“Whether it's preparing for the next year, doing an inventory of what stock we do have, or what stock we need to replace. Ideas about fundraising, ways to get monies to buy new signs or new posts, or new equipment, things like that. So, behind the scenes, you're always still doing something through the winter.”

Once the trails are officially closed down to ATV users, in the middle of November, they remove their signs and reach out to local riders to please stay off the shared trails. Hora says on the parts of the trail where there is a crossover of trail users, they hope that people respect the trail, go over the area gently and tread lightly. That said, most of the ATV and Snowmobile trail systems are separate and are designated with the least amount of crossover areas.

“We’ve made a very strong effort to choose trails that were not currently designated by the snowmobile clubs of the area or designated multi-use trails, we wanted to promote ATV traffic to be off of those areas because they’ve seen a lot of use over the years and we know repairs cost money.”

Hora says keeping the ATV trails in good condition is expensive. “The clubs could see costs between $5,000 or $10,000 every fall to shape up designated trails due to ATV traffic, and we're trying to alleviate that problem for our fellow snowmobile community and clubs because we see the impact that overuse can do on their trail system, so we want to make sure our trails were as separated as humanly possible.”

Why is it beneficial to both the ATV clubs and Snowmobile clubs to take care of the trails in southeast Manitoba?

Hora says the ATV and snowmobile trail system in the southeast has been designed to prevent damage to the trails but each of the seasonal machine users knows that there is a lot of forest in southeast Manitoba and so they’ve created their trail in such a way that the area is used wisely and safely for all riders.

“This has helped the Southeast SnoRiders club in the fall. It gives them time to prepare for their winter riding season. Now they're not spending a lot of time and money shaping and re-grooming trails. They can wait for the snow to come and then groom it.”

Hora says the Woodridge Sandhogs ATV organization is more about working together. “We can sit at the same table and fight for the same rights with the government for trail-use or agreements or what have you. It's better to work together to help one another wherever we can.”

He says they are working together on more than just the trails. “We need sustainable funding which we currently don't have, while our winter counterparts do. it's taken them decades to get to where they are today. We don't have that funding mechanism. We don't have anything that's sustainable to help the ATV clubs out. We need to grow and develop, get more equipment, get out there to maintain that trail because there are no funds coming in except for our club memberships.”

Hora is grateful for the help that they have received when it comes to creating and repairing the trails. “I've had fellow contractors that have come out with a skid steer for the day and, you know, basically donated their time and fuel to help shape up problem areas, which is fabulous, much appreciated. You know where that contractor could have gone out and made, you know, maybe $1000 that day, instead they decided to spend the time working on a trail because they are a rider as well. So, that’s been the biggest challenge with all of our ATV clubs currently in the province, is just that funding mechanism.”

Photographs in the gallery are from the 2022 Adult and Teen Challenge ATV fundraising events (Photo credit: Woodridge ATV Sandhogs) 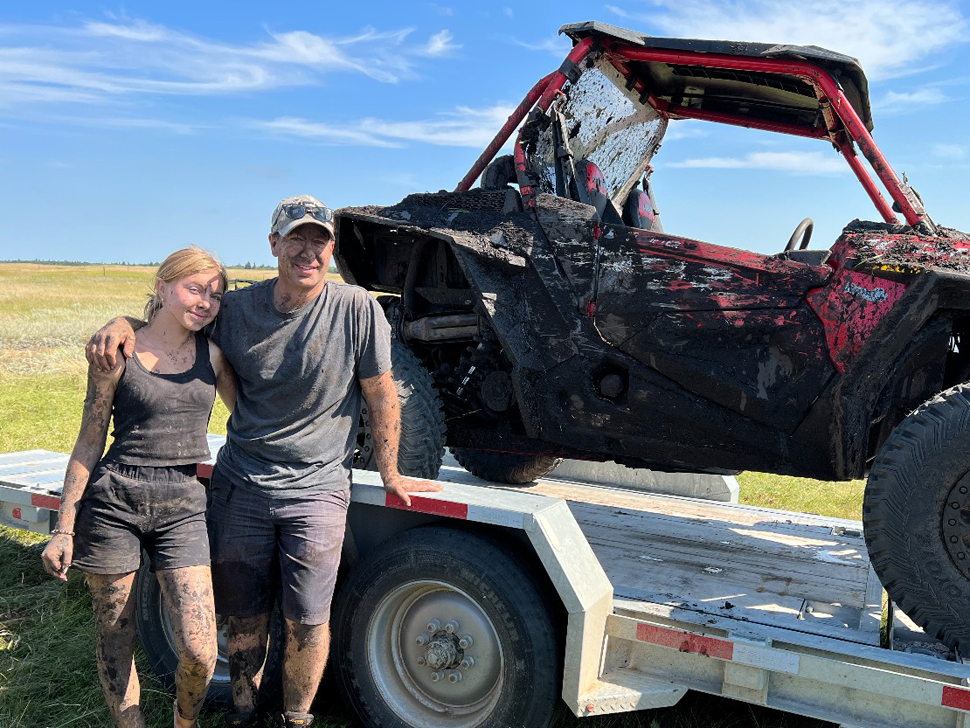 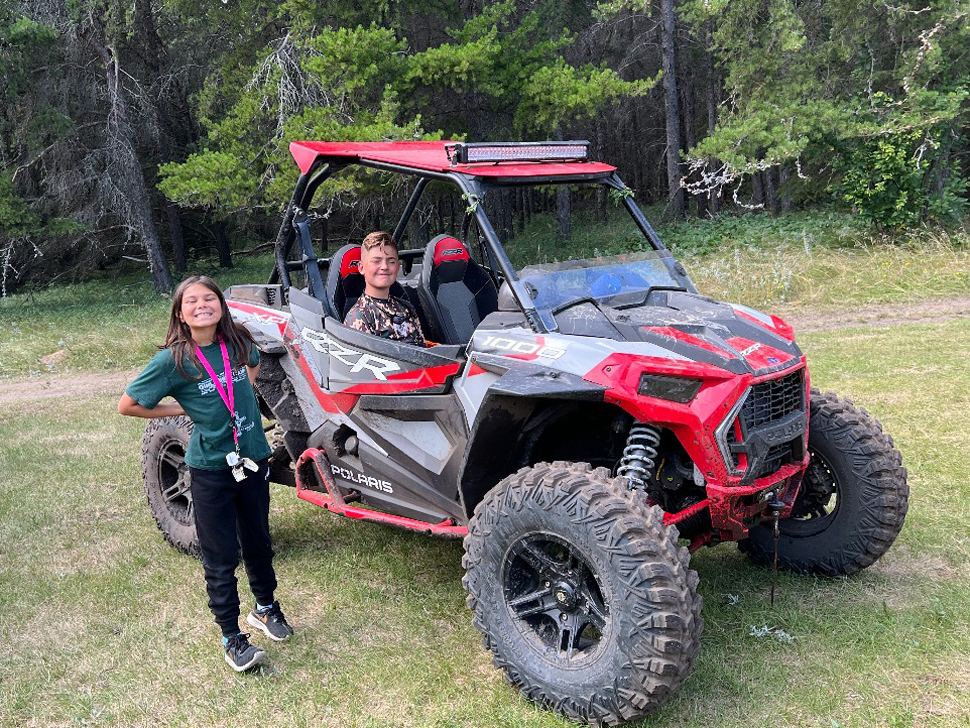 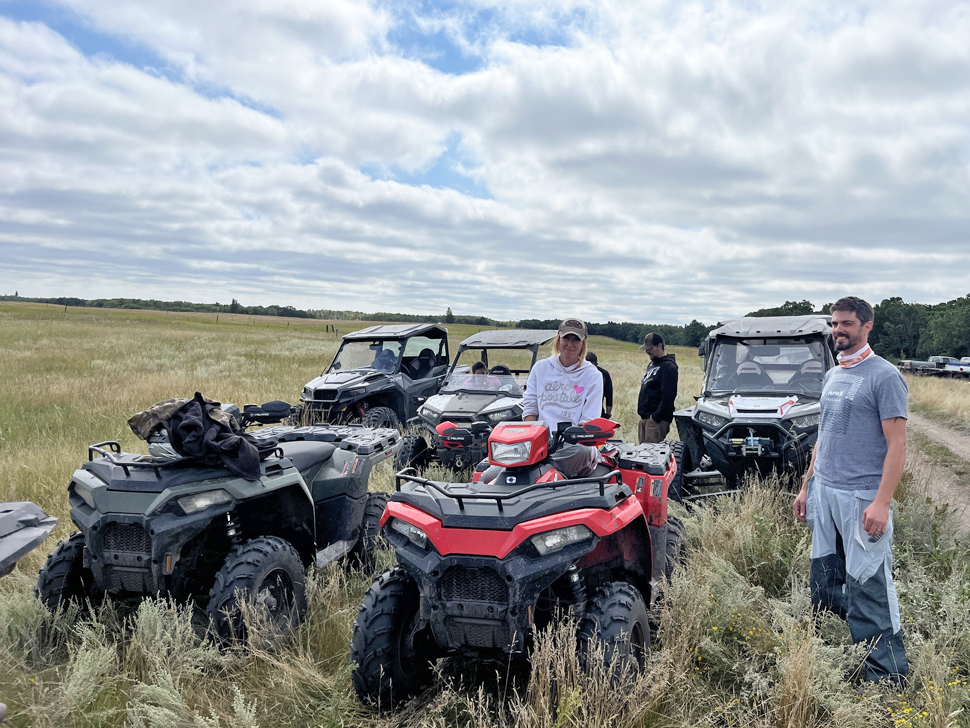 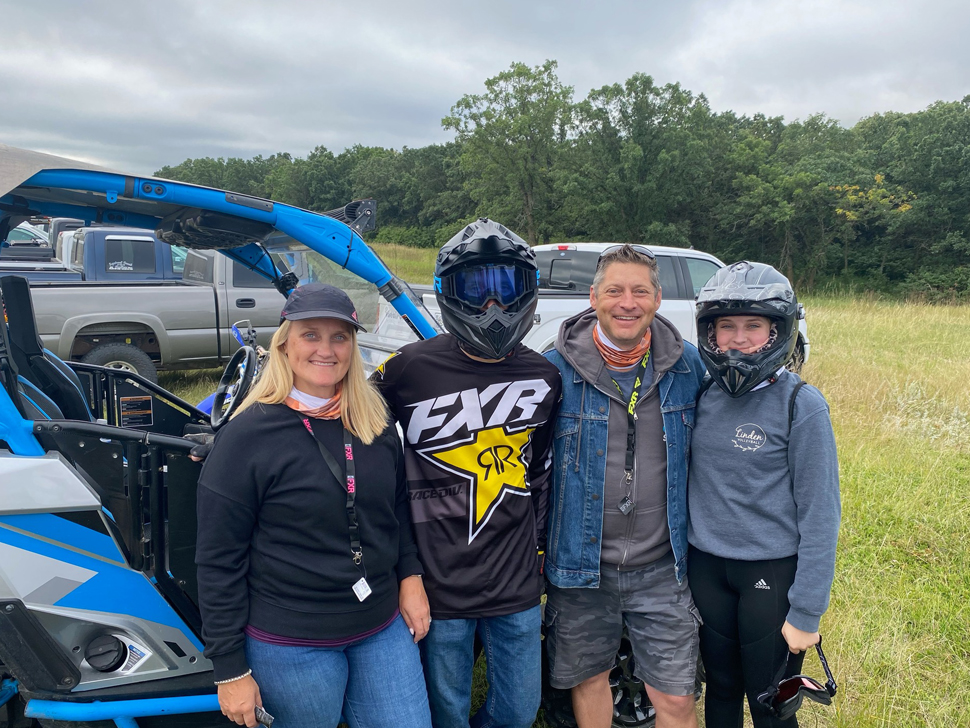 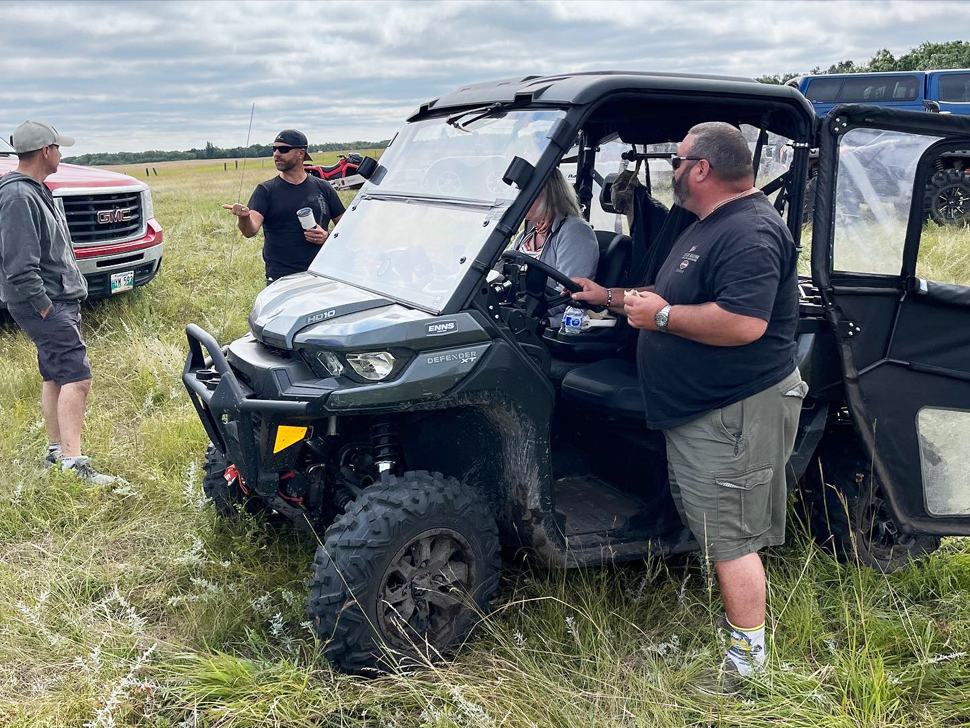 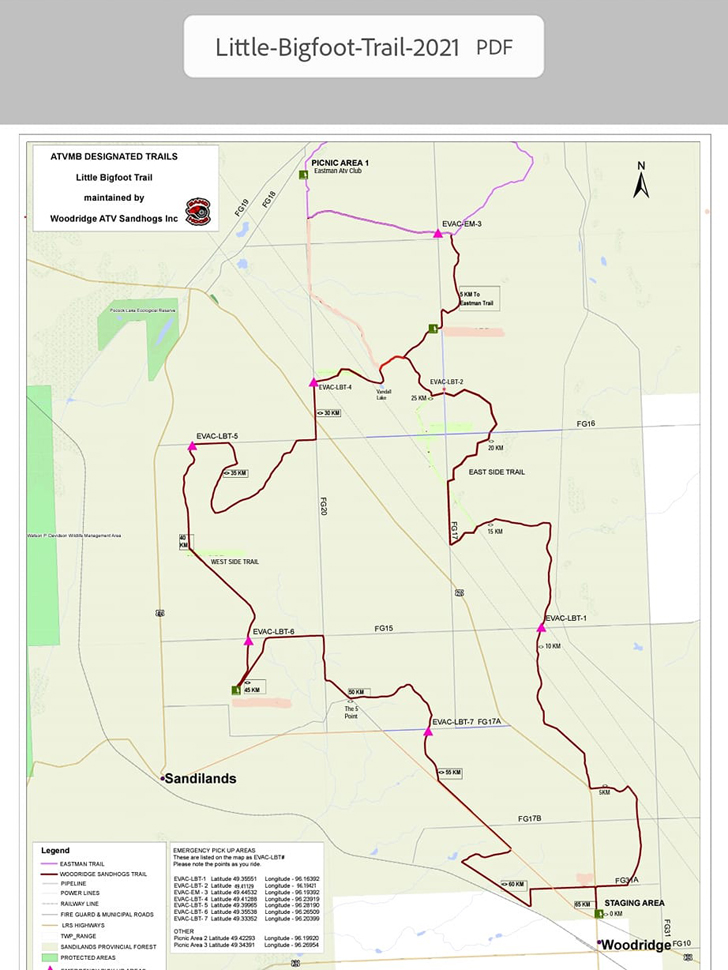 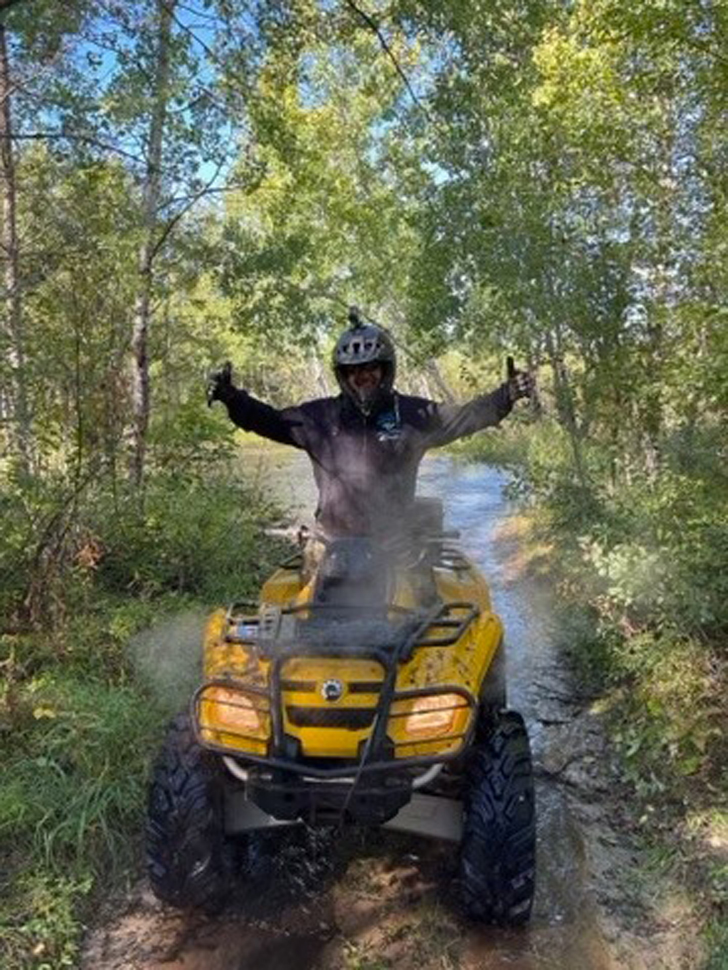 First Colorado low of the season arrives Sunday night, and it will be a rainy one