Celebrating 125 years of Sainte-Anne-des-Chênes, the pilgrimage church of the west

The cornerstone for the new Sainte-Anne-des-Chenes Parish was laid back in 1895, however it took another 3 years to finish the building which now stands as a historical site along Centre Avenue in Ste. Anne.  Three years, is also what it took for the churches 125th celebration to finally take place, only this time because of the pandemic.

But it did, on Sunday, July 10th with over 500 people in attendance including Patrick Fredette, the Ste. Anne Parish Pastoral Council President. Fredette shares a bit of the history of the building.

Before Manitoba became a province, in an area called Oak Point where the Seine River flowed, before the Dawson Trail would become a popular route to both east and western Canada, even before the train, our First Nations peoples, the Ojibwa (Saulteaux) lived.

Fredette continues, “French migrants came in as workers, or as voyageurs, or, as you know, discovering the area and working in the area and the Metis nation was founded. The first settlers might have been in the 1830s, 1840s and then slowly that population grew as more and more people came. At one point it also became a huge site for cutting trees to build the cathedral in Saint Boniface (Winnipeg). That was a massive cathedral, so a lot of people were employed there.”

With the increase in population came the need for better roads for safer transportation of goods and families, so the Dawson Trail was built.

Eventually Oak Point was changed to Sainte-Anne-des-Chênes, in honour of Saint Anne, the grandmother of Jesus. Fredette says she is also the patron saint of travelers and of good travel. A Catholic parish was developed in the mid-1800s and then eventually a church was built. Slowly the church needed a bigger building because the Dawson Trail became busier, and more and more people were travelling through the community.

The location also became known as a pilgrimage site for Catholics in Canada. There was Sainte-Anne-des-Chênes of the west, with the Sainte-Anne-de-Beaupré of the east in Quebec. Of the west pilgrimage site Fredette says, “Over the past 100 years we've had thousands and thousands of pilgrims come through to honor Saint Anne. In 1947, 3000 people arrived on a pilgrimage to Sainte-Anne-des-Chênes. They had come from everywhere, so the need for a new church developed in the late 1800s and through Father Giroux it was built.”

Fredette continues, “Since the cornerstone, was laid in 1895 and the building was completed in 1898, the celebration committee decided that, the 125th of laying the cornerstone was three years ago, and the 125th of the building of the building, with its first mass celebrated, was 125 years ago in 2022. So, we kind of built a little bit on the timeline saying that’s how each one of us has a timeline to develop and become better versions of ourselves or better people. The construction of the church is sort of a symbolic event that way too. So, we kind of used that as a concept also to celebrate.”

Last Sunday's celebration was intended to be a community-wide event. Fredette says, “we decided to make it a day that's going to represent several things. We're in a time of reconciliation and it's really important to remember that with all the problems that exist in our world, that reconciliation is needed to help heal. Not only with our First Nations, but with ourselves and with other people all over the world you can see the need for reconciliation. And so we wanted to honour that.”

And secondly he says they chose to use the day “to represent the pilgrimages and to honor the building and to honor prayer. So, we started the day with a bilingual mass in the morning with about 350 people in attendance. The music was great. The celebration was with the Archbishop Albert LeGatt. It was really well done.”

There was a processional following the morning mass to Redemptorist Park / parc des Rédemptoristes, where a special service of reconciliation was done at the graveyard. Fredette acknowledged that "the Metis have been pushed aside and there is a need to really reconciliate with them 'cause they are our brothers and sisters, and we were one big family and so that was important to honor them.”

He continues sharing about some of the events of the day including music, canoe rides, games for the kids. They had also set up a teepee healing tent.

Fredette says despite the forecast for rain last Sunday, “It was our blessing because it was a beautifully, unpredictably sunny, gorgeous day. There was no mosquitoes. There was just a beautiful breeze and it you couldn't have asked for a better day in anyway. So all together it was a really beautiful celebration. We got really blessed.”

When talking about the 125 year history of the church Fredette says, “today this building is a historic site and I encourage people to come by and look, because these buildings are disappearing quickly in our area. The way we build in the 1800s is not like we build now. This building has a beautiful structure. The bells that are in there, the Casavant Pipe Organ is 100 years old as are some of the statues. Then there's the frescoes, many painted by Leo Mol. The stained windows are quite magnificent and we're really fortunate to have a jewel like that in our town, in our province for everybody to enjoy.”

More than anything Fredette says buildings like this are a reminder “that we need to become better versions of ourselves. We need reminders of how to heal and how to come together and we use the Catholic faith for that and we use this building to represent that as well as the celebration. Everyone is welcome.” He says the 125th celebration was "great, like a leaping moment to continue in the future that we definitely want to build on. We will have more events that are reconciling like this, to keep building because it's so important today and we don't have enough of it.”

(Photo credit to the photos in the gallery: Eldon Zigarlick) 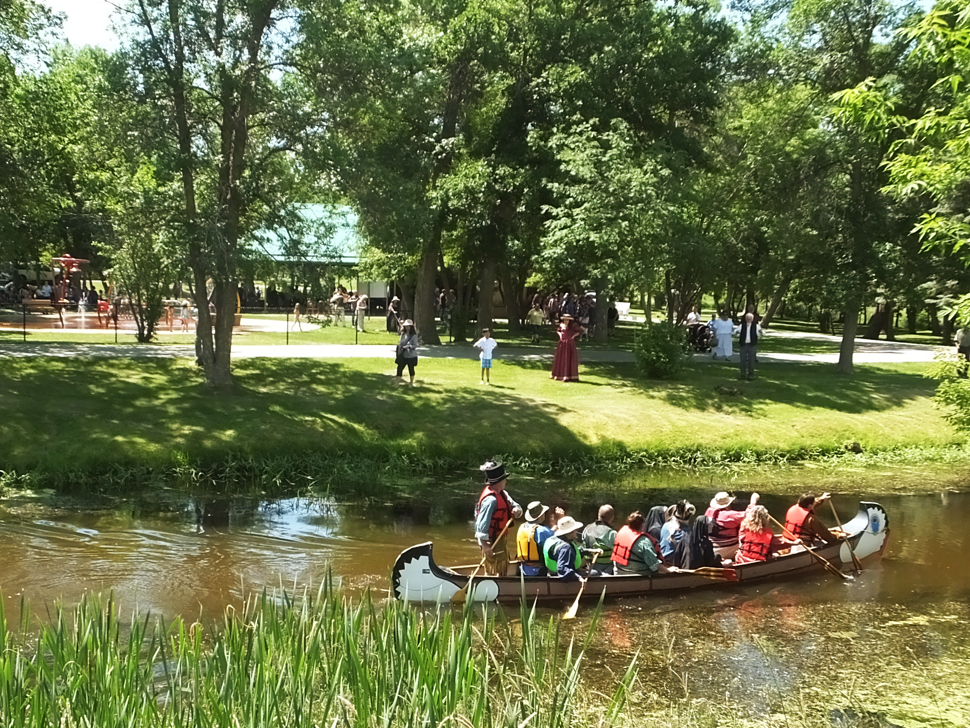 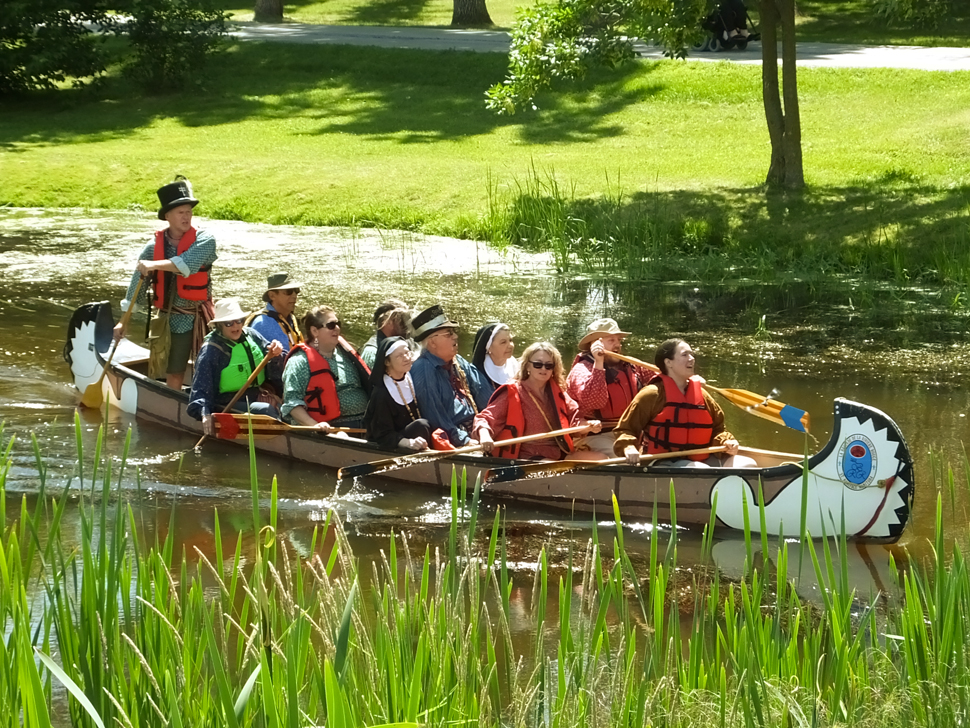 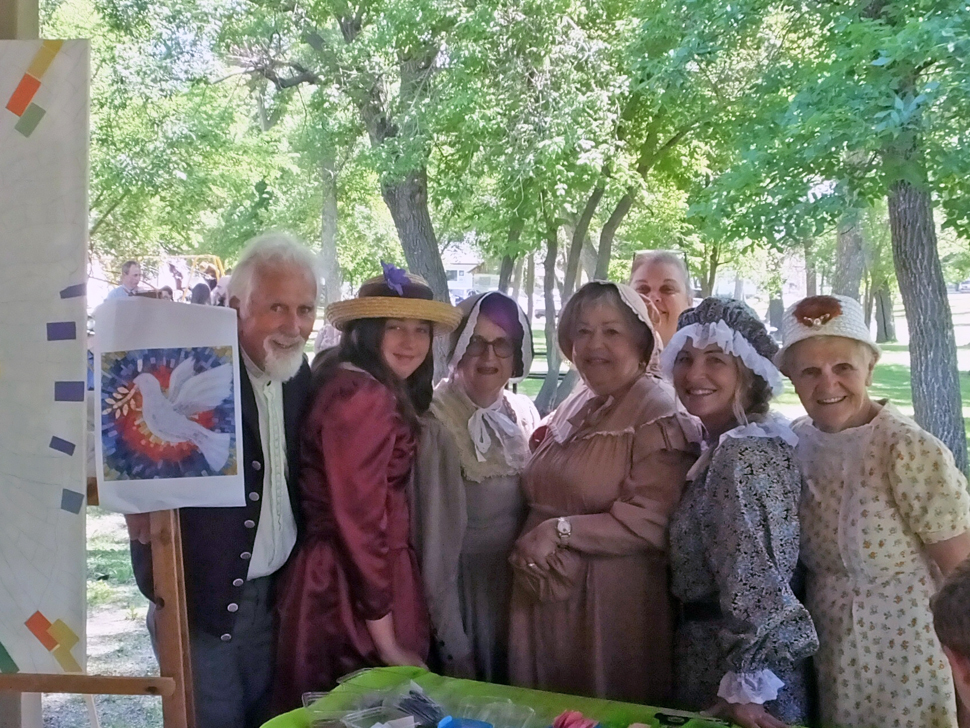 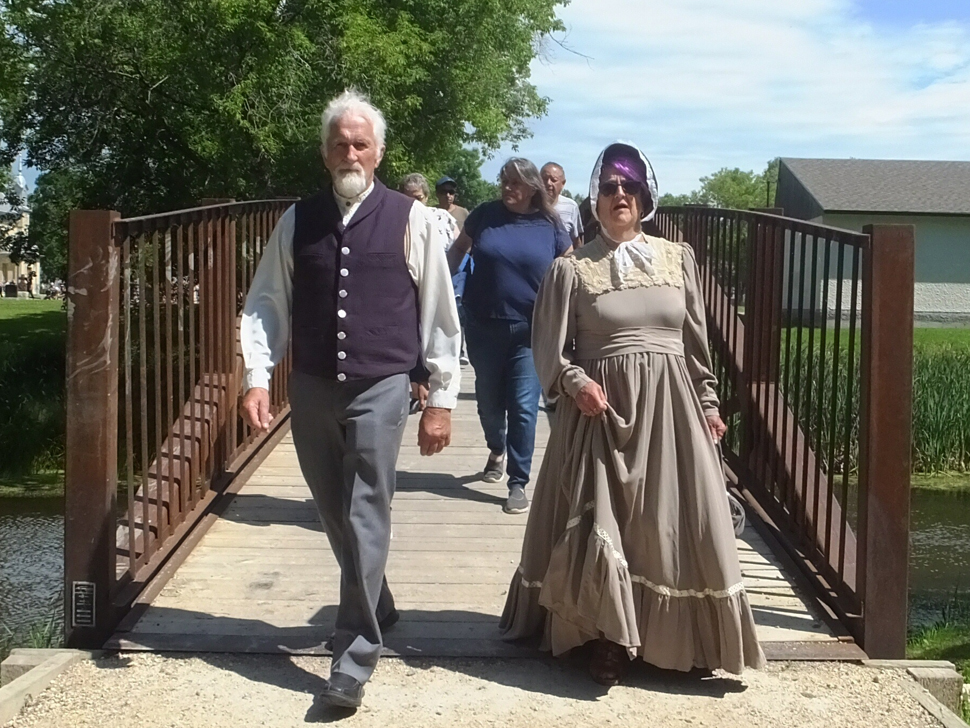 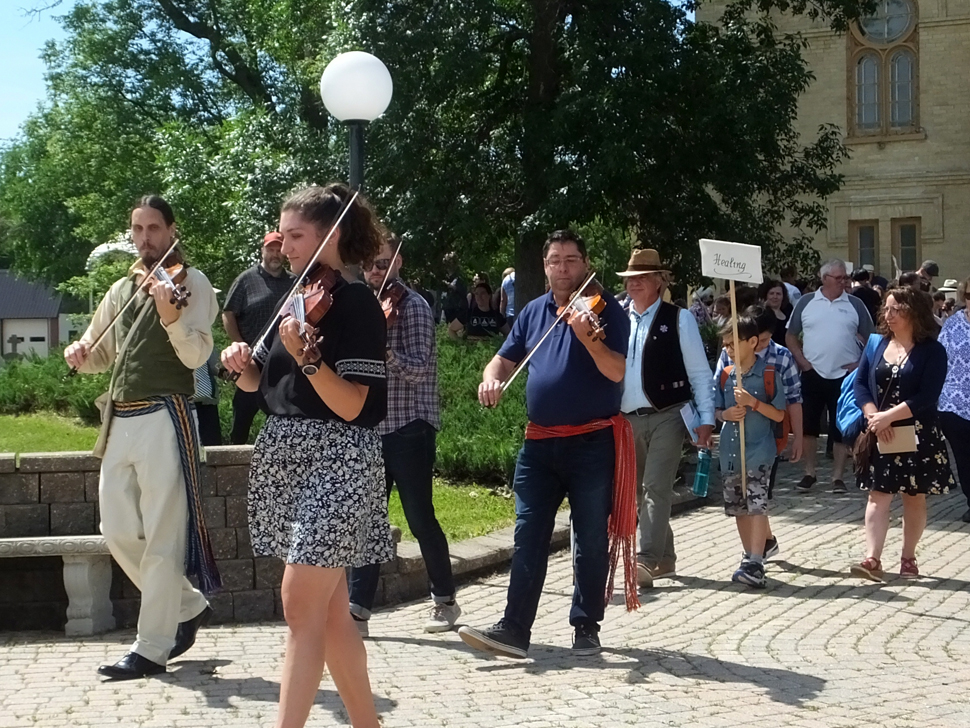 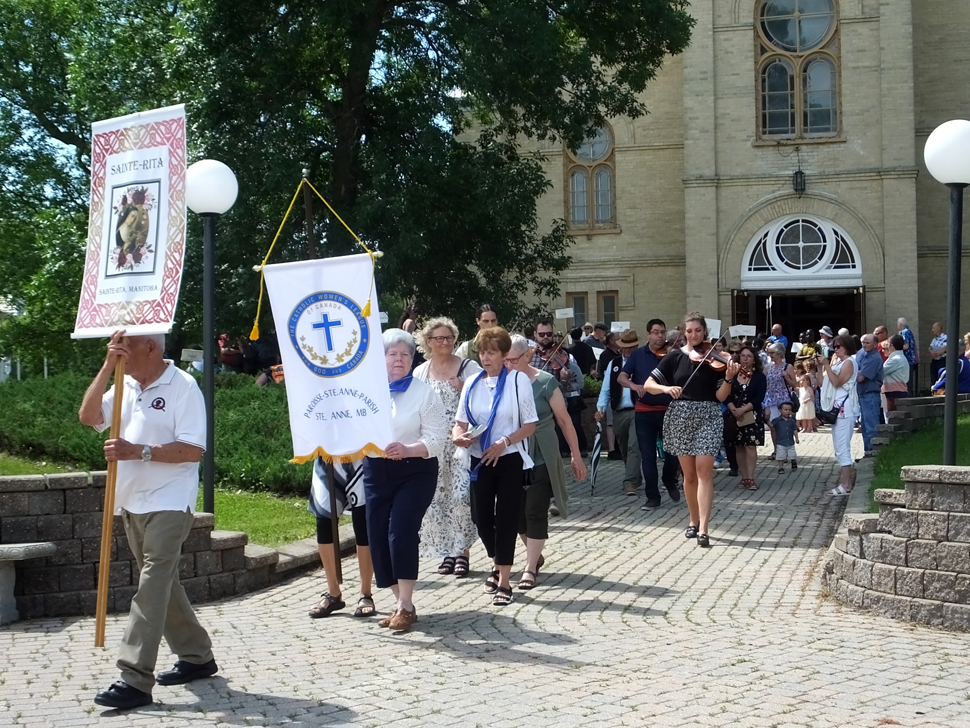 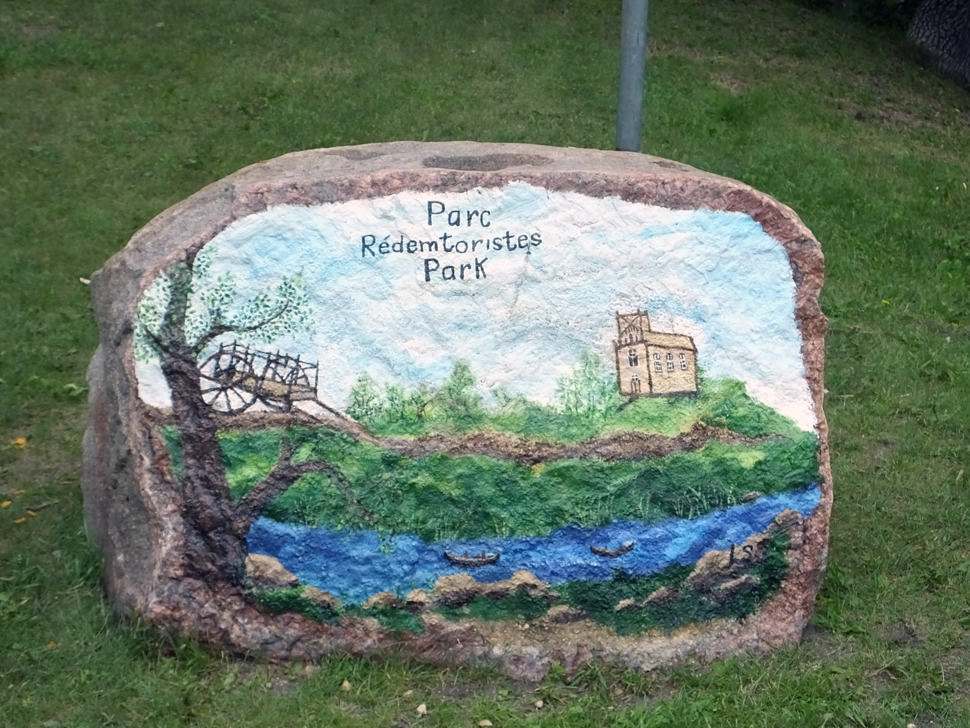 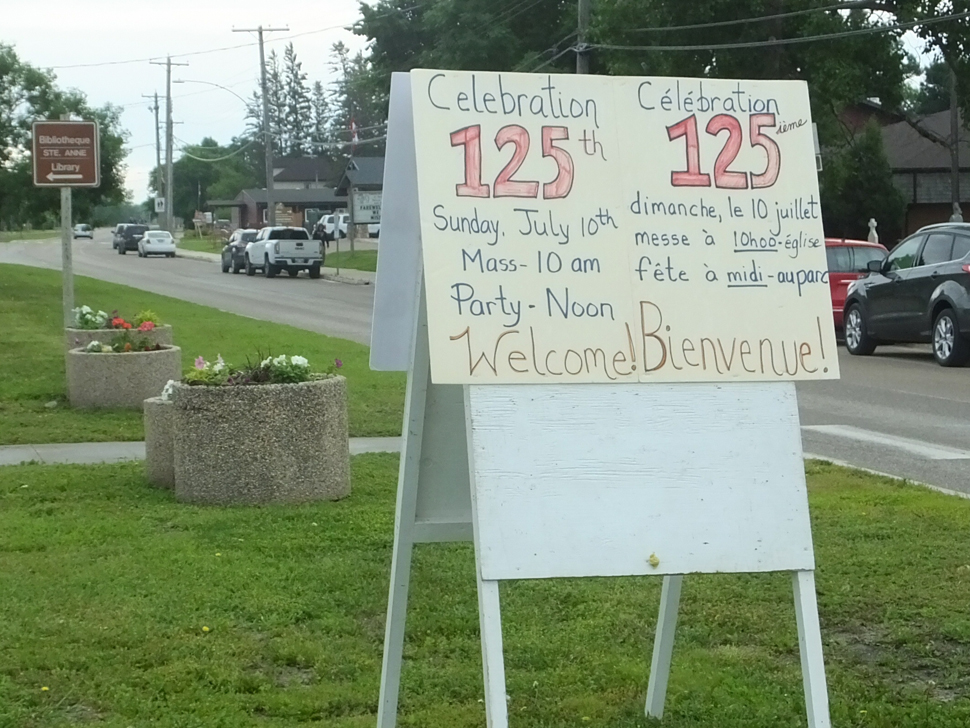 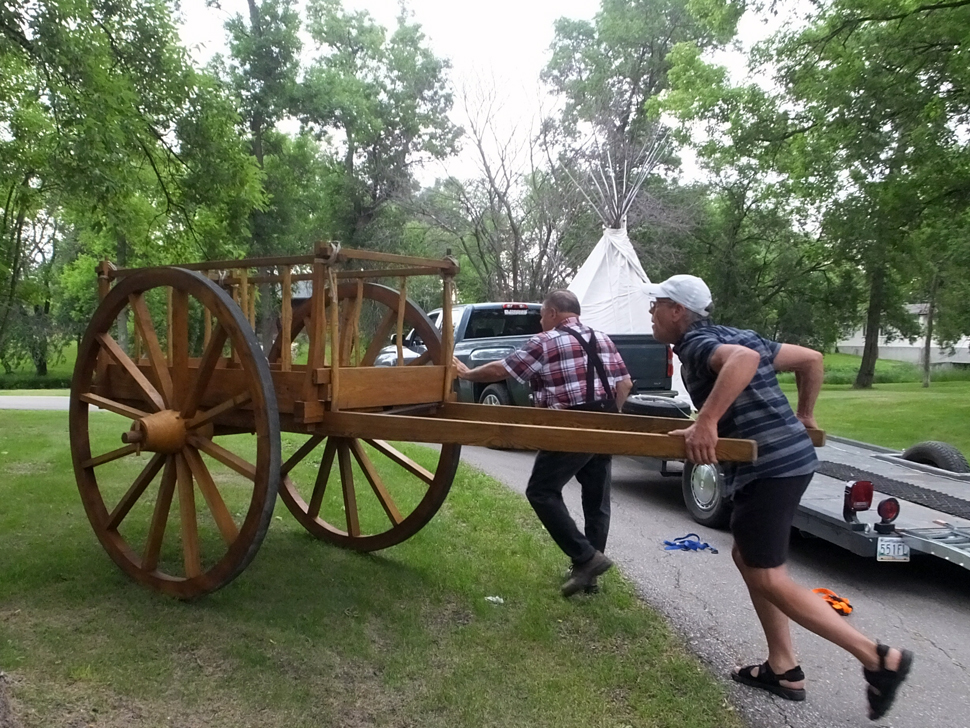 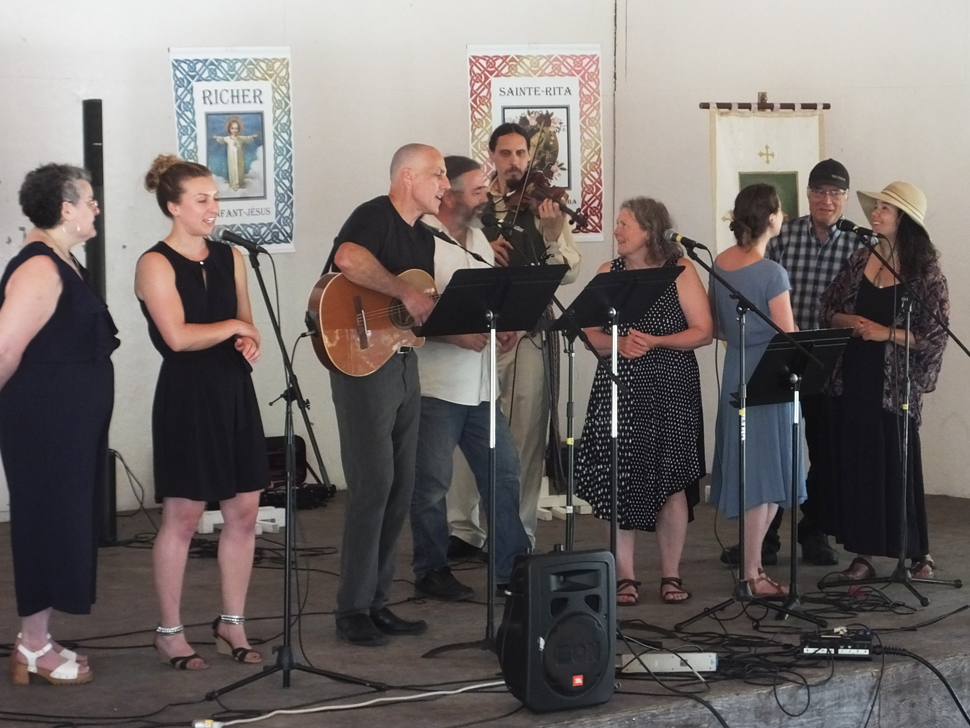 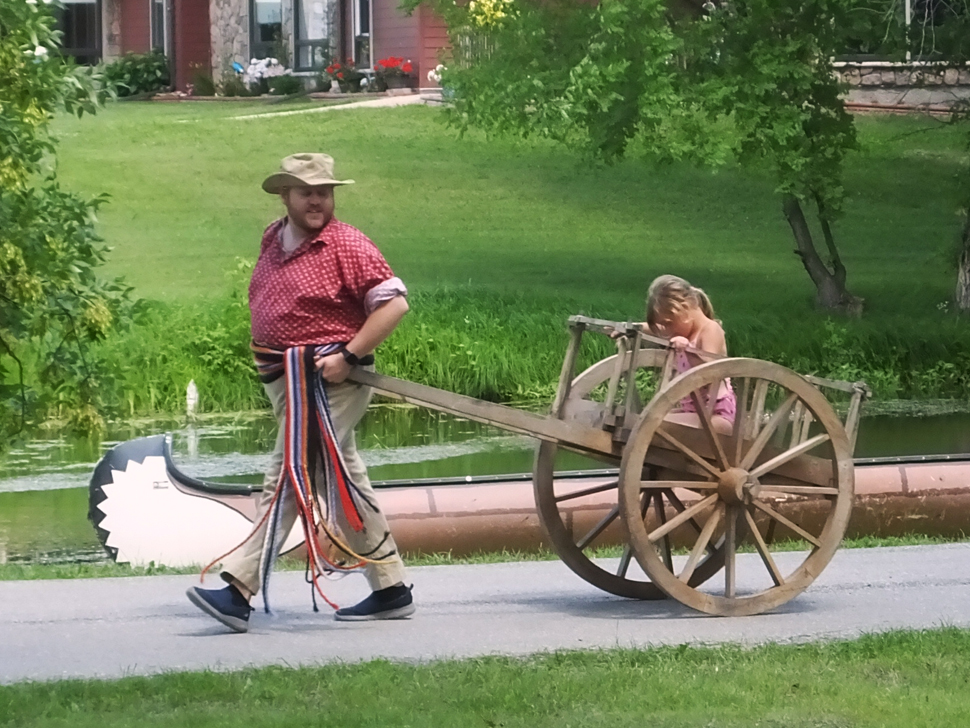 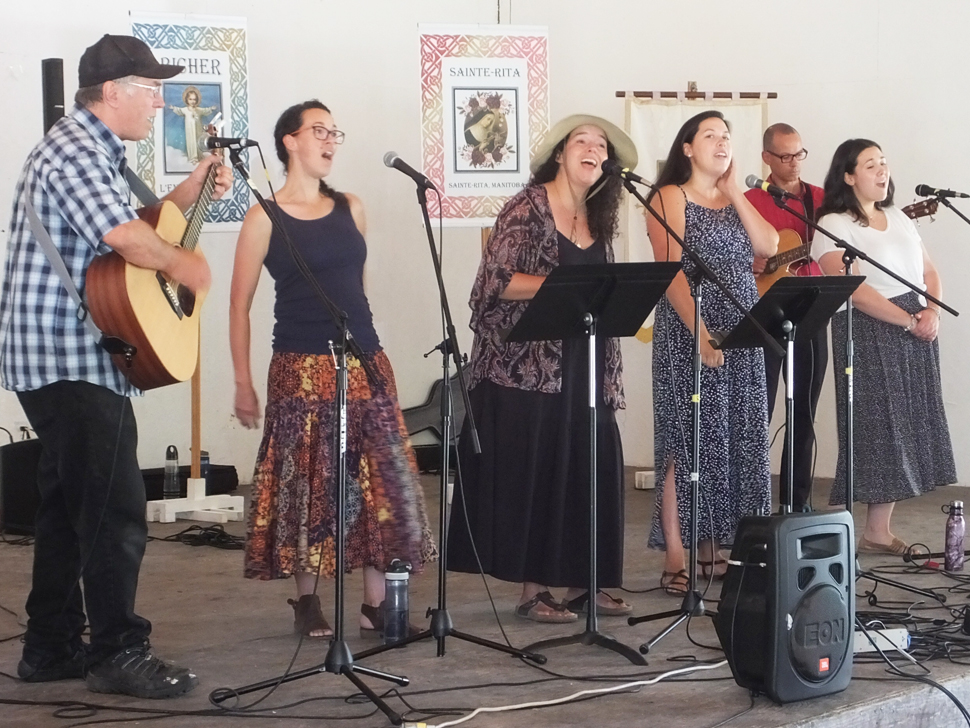 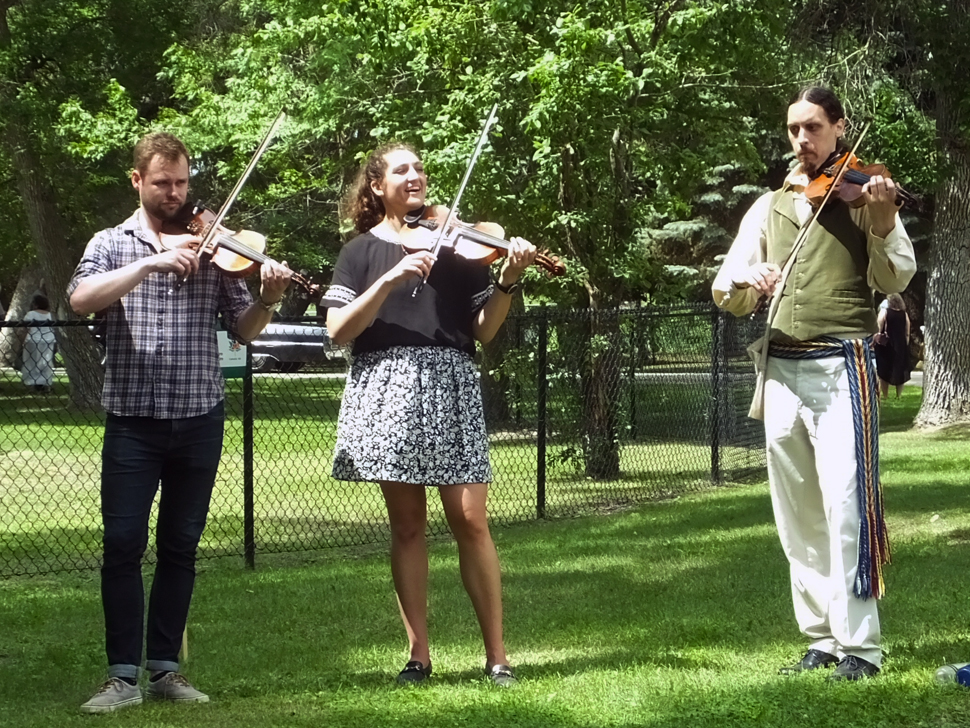 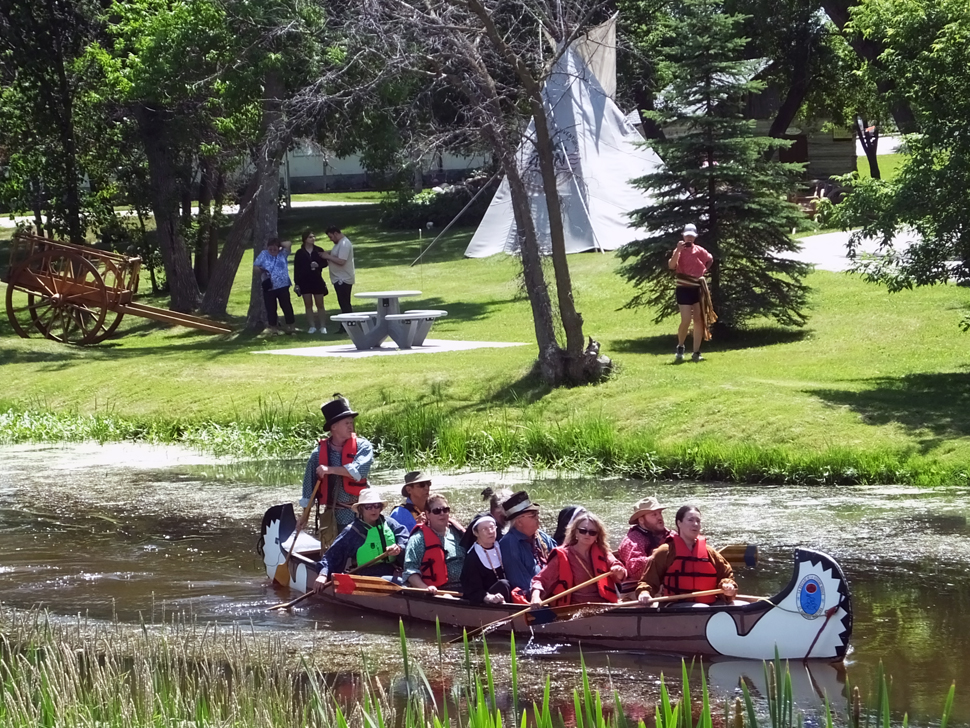 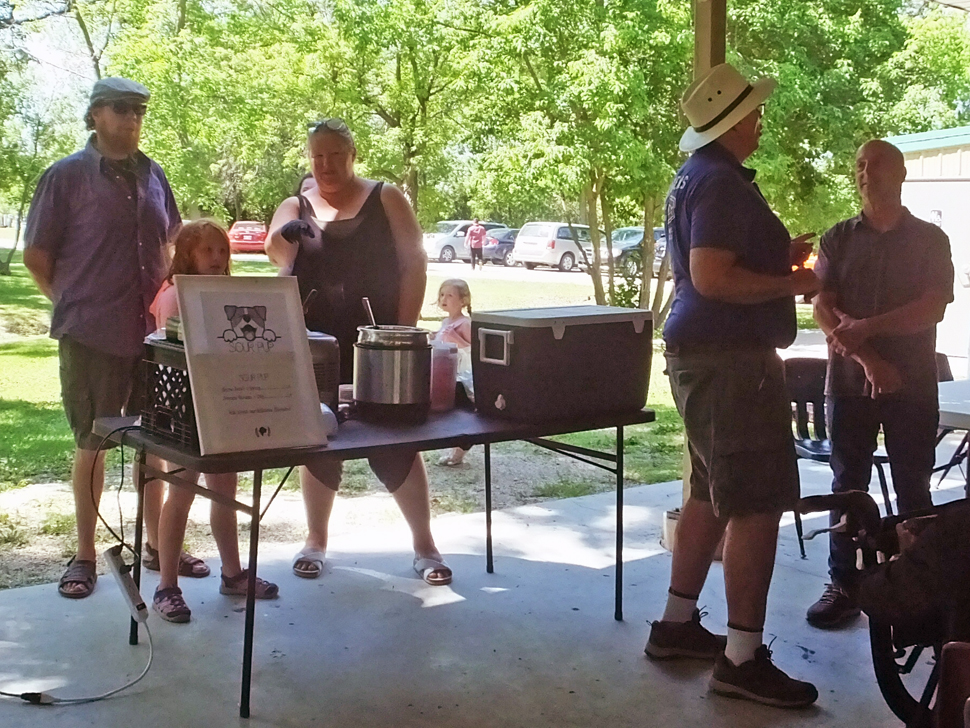 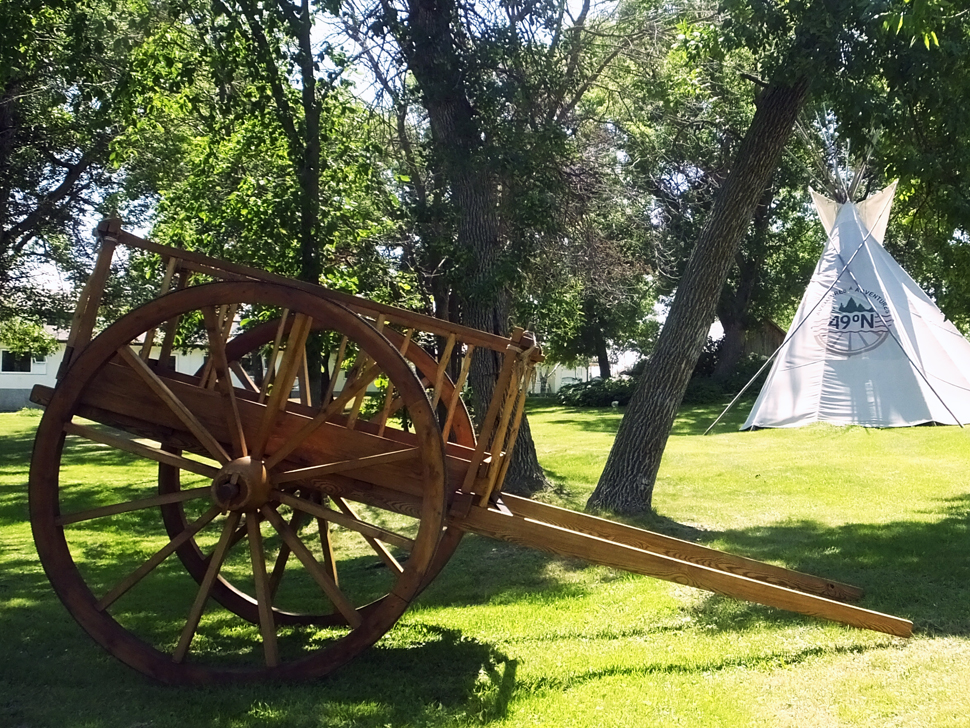